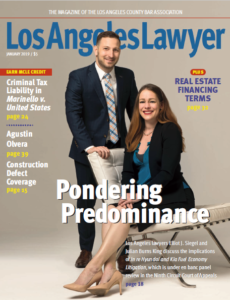 The United States Supreme Court decides very few tax cases and even fewer criminal tax cases. In Marinello v United States the Supreme Court ruled that the Government’s  ever broadening use of the omnibus clause of Section 7212, the so called “one person conspiracy” statute,  be dialed back.  In January’s issue of Los Angeles Lawyer, Sandra Brown, Principal of our firm and former Acting United States Attorney for the Central District of California, examines Marinello and its implications for future criminal tax enforcement.  Read More

< Back to all Posts